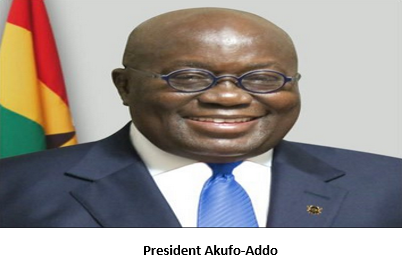 President Nana Addo Dankwa Akufo-Addo has said his government has paid all the locked-up deposits in the nine local banks that collapsed and 98 per cent of the funds that got stuck in the over 386 microfinance institutions, finance houses and savings & loans companies that also went down.

The banks and financial institutions were collapsed by the Bank of Ghana within a space of two years in a clean-up exercise of the financial sector. In the mid-year budget review that was recently presented to Parliament, Finance Minister Ken Ofori-Atta said the government is spending GH¢21 billion in picking up the tabs for the clean-up exercise.

Speaking on Koforidua-based GBC-owned Sunrise FM in the Eastern Region on Tuesday, 4 August 2020, President Nana Akufo-Addo said the state is not indebted to any Ghanaian or institution that fell victim to the collapse of the nine local banks. “All those who had deposits in the banks, all of them, their monies have been refunded”, the President said.
“Let me repeat it: All those whose savings were in the banks, all those savings have been refunded and paid to the people”, he stressed.

The President said but for the central bank’s intervention under his watch, the depositors would have lost all their funds since the affected banks were already on the brink of collapse. “In fact”, he noted, “the intervention of the central bank was all to protect their savings because many of the banks that finally went into receivership were about to collapse”, adding: ‘Their situation was dire, and if they had been allowed to collapse, all those deposits would have gone up in smoke”.

He said: “As far as the microfinance and savings & loans institutions are concerned, 98 per cent of the deposits of the funds have also been paid”.

The President conceded: “There is still a balance”, noting: “The Receivers, Nipah and the others, are working on it and I believe Nipah has gone so far as to say that by the end of August, all of them would have been paid”.
“Yes, there are still some in the system that have not received their money but the effort is being made to make sure that they are paid”, he said.