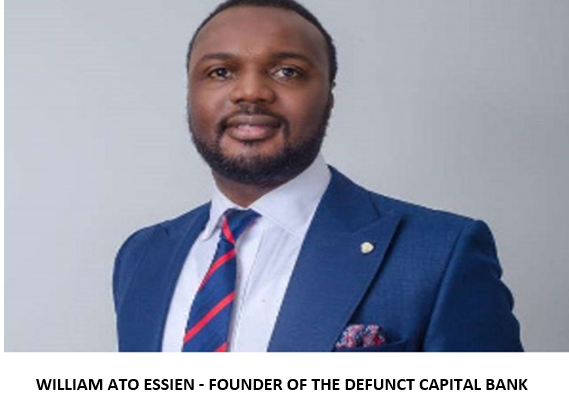 The Commercial Division of the Accra High Court has dismissed an application by the Founder of the defunct Capital Bank, William Ato Essien, which sought to halt his trial pending a review of the court’s ruling against a submission of no case.

The court, presided over by Justice Eric Kyei-Bafffour, a Justice of the Court of Appeal sitting as High Court judge, ruled last Thursday that the application for stay of proceedings did not demonstrate any exceptional circumstance for the court of halt the trial.

They have pleaded not guilty to all the charges of stealing, abetment of stealing, conspiracy to steal and money laundering.

After the prosecution brought its case to a close, lawyers for the accused persons in June this year filed a submission of no case in line with Section 173 of the Criminal and Other Offences (Procedure) Act, 1960 (Act 30).

However, the court on July 8, this year, ruled that the prosecution was able to establish a prima facie case against the accused persons, and, therefore, ordered them to open their defence.

On July 22, 2020, counsel for Essien, Mr Baffour Gyawu Ashia Bansu, notified the court about the stay of proceedings pending his application for review at the Court of Appeal.

Mr. Bonsu, who moved the motion in court, argued that exceptional circumstances exist in his client’s application because there was a “viable chance of the success” of his clients; appeal at the appellate court.

“My Lord, what we are saying is that the grounds of appeal as contained in the application raises very serious and fundamental issues to be determined by the appellate court.

“We are saying that exceptional circumstances exist in this particular instance, reason being that there is a viable chance of the success of applicant’s appeal,” counsel said.

Justice Kyei-Baffour subsequently ruled that the applicant failed to demonstrate that further hearing of the suit would gravely infringe on his rights.

“Besides, reading the application together with the affidavit, and examining the whole processes, the court can only state that the chance of success of the applicant at the appellate court is very bleak, and on that score I find no justification or compelling reason to grant this application. Same is declined,” he said.

The court adjourned the case to October 14, 2021, for the accused persons to open their defence.

Capital Bank was once of the first banks that collapsed after a clean-up of financial institutions started by the BoG in 2017.

On August 14, 2017, its license and that of UT Bank were revoked after the BoG declared them insolvent.

The BoG allowed the state-owned GCB Bank to acquire the two banks in order to protect depositors’ funds and also to enable them to stay afloat.