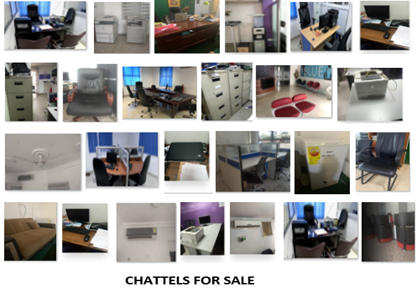 A consortium of Auctioneers (Wildos Mart, Broadway Mart, and Yakamata Mart) appointed by the Receiver of the resolved 347 Microfinance Companies (“MFIs”) and the 23 Savings & Loans and Finance House Companies (“S&Ls”) wishes to inform the general public of an auction sale of the chattels of the resolved companies.

The sale of the chattels of the resolved MFIs and S&Ls will be conducted at the respective branches of the resolved MFIs and 23 S&Ls across the 16 regions from Monday 8 March 2021 until all items are sold out. Chattels to be auctioned include air conditioners – split/window, desk-top computers, fridges, water dispensers, swivel chairs, executive office tables/chairs, leather sofas, couches, flat screen television sets and generators.

All interested buyers may contact any of the appointed auctioneers whose details are shown in the table below, or the Receiver’s representative on 0247143593/0202731441, if any further information is required: