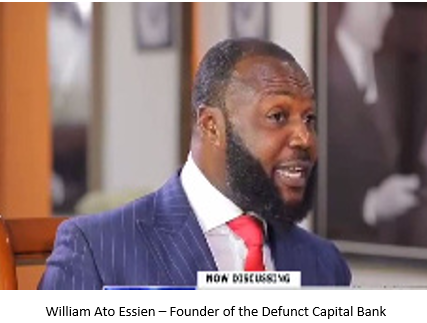 Embattled founder of the defunct Capital Bank, Ato Essien, is willing to refund GH¢27.5 million back to the state, his lawyers have said.

Willaim Ato Essien is standing trial for allegedly collapsing the bank.
The GH¢27.5 million is what the state has accused Essien of using as business promotion and which he allegedly carried in jute bags to be distributed to some people.

The online news website of the state-owned Daily Graphic newspaper reports that the Counsel for Mr Essien, Baffour Gyewu Bonsu, told an Accra High Court on Thursday that his client had already paid GH¢1.4 million of the GH¢27.5 million to the state.

According to the report, Mr Essien’s attorney said discussions are still ongoing with the prosecution, hence, the court should adjourn the case to enable the discussions to continue.
The prosecutor, Mariana Appiah Oppong, a Chief State Attorney, confirmed to the court that lawyers for Essien had indeed informed her about their intention to pay the amount.
“She, however, said the lawyers must bring a detailed proposal to the Director for Public Prosecution (DPP) and after a review the DPP would make a determination to accept it or not,” Graphic.com reports.

Presiding Judge, Justice Eric Kyei-Baffour, has given Mr Essien’s attorneys one month to send the proposal to the DPP for hearing to continue on June 18, 2020.
Mr Ato Essien and three others became the first to be hit with criminal trials over the banking crisis last year. All the four accused persons pleaded not guilty to the charges levelled against them. The Founder of the defunct Capital Bank, William Ato Essien; the Managing Director of the bank, Fitzgerald Odonkor, and two other persons — Tettey Nettey, the Managing Director of MC Management Services, a company said to be owned by Essien, and Kate Quartey-Papafio, a businesswoman and Managing Director of Reroy Cables Company Limited — have been put before the Accra High Court on 26 counts.

They are facing charges of stealing, abetment to stealing, conspiracy to steal and money laundering.