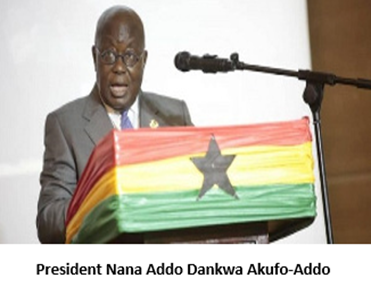 The government expended GH¢21 billion to clean up the banking sector, the President, Nana Akufo-Addo has announced.

Delivering his final ‘State of the Nation’ address to the 7th Parliament, he said “an amount of GH¢21 billion was used to fund the cleaning up exercise. These are painful lessons we all have to imbibe” The Bank of Ghana embarked on a banking sector clean-up, recapitalization, and other regulatory reforms from mid-2017 to end-December 2018 in line with its mandate to promote the safety, soundness, and stability of the financial system to support economic growth.

A regulatory crackdown on poor business practices and weak capital positions in Ghana’s banking sector has resulted in a series of market exits since August 2017. The outcome is a smaller but more sustainable banking industry, though this has come at a price.  A similar clean-up process, which has already resulted in hundreds of license withdrawals, has also been applied to the Microfinance and Non-Banking financial institutions sector.

According to the Banking of Ghana sector report for last year, the first major assessment criteria of the reform process is the growth of the banking sector. Although the recapitalisation process scaled down the number of banks to 23 in Dec-2018 from 33 in Dec-2016, the industry’s balance sheet indicators pointed to a stronger growth performance in the key performance matrix.

Another positive outturn from the reforms was repositioning of the banking sector to support economic growth through intermediation. There has been a strong rebound in credit growth since the reforms took effect.