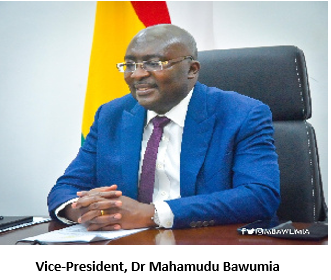 Vice-President Dr. Mahamudu Bawumia says the government has spent GH¢21billion to clean up the financial sector. He said 99 percent of depositors of the affected banks, microfinance and savings and loans companies had been fully settled. The Vice-President was speaking at the 12th Edition of the Nation Building Updates at the Cedi Conference Centre, Department of Economics, University of Ghana.

The event was on the theme, “Future of Ghana’s Economy”.

He added that the government on compassionate grounds had decided to pay up to GH¢50,000 to all customers of affected Fund Management Companies while the liquidation processes continued. Dr Bawumia informed that based on the validated claims, the partial bailout would result in 89 percent of the affected individuals being fully settled.

He said the relatively strong performance of the economy, among other things, led to Ghana becoming the destination of choice for Foreign Direct Investments (FDI) in West Africa, according to the 2019 World Investment Report by UNCTAD. He said the strong economy built by the Government had provided space and ability to provide the basic needs for people, both as part of a broad, inclusive, transformational development strategy and also to withstand crises like COVID-19.

“The shock of COVID-19 notwithstanding, the economy is bouncing back,” he added.

The Vice-President said the government’s economic transformation agenda was on course. However, he added, in the next four years the government would build on the successes of their “One District, One Factory” and “Strategic Anchor Industries” policies to further enhance agro-processing.

He said government would also enhance cocoa processing, add value to minerals and petrochemicals, promote labour-intensive and light manufacturing activities. “We will continue the development of the Aluminium, Iron and Steel industries along their entire value chains through GIADEC and GIISDEC, and leverage our Regional Hub status and as hosts for the Secretariat of the AfCFTA to expand our access to regional and continental markets,” he said.

The Vice-President said those things were not happening in a vacuum, and more importantly, they did not happen by accident. He said rather it came from their overarching strategy to transform the structure of the economy to add value to the country’s agricultural and natural resources as well as careful planning and execution.

He said the Akufo-Addo led government was also building the foundations for industrial development to ensure sustainable, long-term economic growth as well as create jobs.