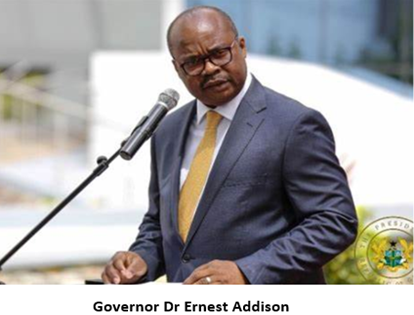 Governor of the Bank of Ghana, Dr. Ernest Addison, has provided a detail response to the reason the Central Bank will not be appearing before a Parliamentary Committee to answer a petition by some shareholders of defunct UT Bank and unibank.

According to him, one of the major reasons is to allow the legal proceedings to flow smoothly, since some of the shareholders have already slowed the process with many counter suits.

Speaking at the Ghana Chamber of Commerce and Industries Business Forum, Dr. Addison said “running to parliament to seek redress for the revocation of an institution’s licence is not one of the processes laid down under the law for those who feel aggrieved by a licence revocation by the Bank of Ghana.  There are already a number of actions filed in court and at arbitration by the same persons who run to parliament for cover up and the Bank of Ghana simple response to parliament is respectfully to allow the pending legal processes to run their course.”

“Indeed sometimes in September 2018, the 7th Parliament undertook a formal inquiry into the financial sector clean up,  the key factors that led to it and the manner in which it was carried out.  Among other things to appear before it and to answer specific questions aimed at assisting the committee to understand the events surrounding the cleanup exercise. The Bank of Ghana cooperated fully with the committee and provided all the necessary information to assist its members reach their own conclusions”, he further noted.

Dr. Addison explained that the Central Bank had hoped the committee would have made available its report to Parliament and the public after deliberations, but nothing was heard. He called for public support for the receivers to be able to retrieve all properties of the defunct financial firms, as well as the government, to recover the over ¢19 billion bailout fund used to settle depositors funds.

The Governor also used the opportunity to request the Finance Committee of Parliament to make public its investigative report on the banking sector clean up exercise, which was conducted in 2018.

The Governor also used the opportunity to clarify assertions that the timing of banking cleanup was not the best, saying, “the timing of the clean-up and reforms could not have been better, and there is no doubt in the minds of any well-meaning Ghanaian, of the criticality of the reforms in the banking sector in anchoring the economic transformation and re-vitalization agenda of the government.”

Covid-19 regulator reliefs The Governor also said the COVID-19 related regulatory reliefs and policy measures have continued to support lending activities in the banking sector. However, in response to the crisis,

Dr. Addison said there was substantial paying down of debt incurred before the crisis by the private sector in tandem with rapid growth in issuance of new loans. From the beginning of the year to April 2021, new advances totalled ¢10.5 billion, marginally lower than the advances of ¢10.9 billion during the same period in 2020. Due to weakened demand conditions, and the substantial paydown of debt (about GH¢36.0 billion in 2020 and GH¢15.0 billion during the first five months of 2021), Dr. Addison said annual growth in private sector credit was 6.9 percent as at April 2021, compared with 17.9% recorded in April 2020. It is expected that as the economic activity rebounds and lending rates drop further, private sector credit will pick up.

“The opportunities from the extent of digital penetration in Ghana must be identified with high level of internet subscribers and wireless subscribers. Technological innovation can for example enhance agricultural productivity through the use of GIS information to undertake precision farming. Technology such as digitisation of medical records and remote diagnosis of diseases also has potential for the health services sector. Indeed, the impact of technology in promoting financial inclusion using digital technology is another example of how technology can help create new opportunities”, he added.

President of the Ghana Chamber of Commerce and Industries, Clement Osei Amoako in a speech expressed confidence that members of the business community are ready to support government’s economic revitalization programme.

The theme for the forum was “Redefining business success “the path for business value, resilience and sustainability.”