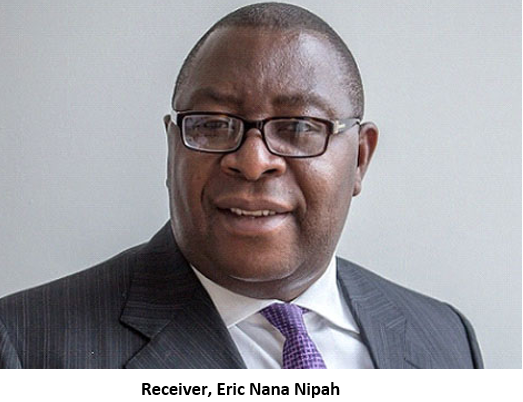 The Receiver of the defunct 347 microfinance companies, 23 savings and loans and 39 micro-credit companies has recovered GH¢598 million out of the targeted combined assets of GH¢2.9 billion. The amount was recouped from loan recoveries (GH¢44 million), placements and investments (GH¢495 million), balances transferred from other banks (GH¢50 million), sale of vehicles (GH¢4 million) and cash in vault (GH¢5 million).

The Receiver said he had, therefore, made a report to the Economic and Organised Crimes Office (EOCO) to help with the tracing of assets of the affected institutions.

“We have involved EOCO in the tracing of assets and EOCO has done some good work in this area, where they have been able to trace some assets of these institutions. We forwarded the list of the top 10 institutions from whom we have received the highest claims from depositors to EOCO and asked it to do some investigations to trace the assets of those institutions.

“The intention is to recover all these assets and pay all creditors of the affected institutions. As we speak, we have initiated processes and started the phase two of sale of motor vehicles and landed properties of the institutions,” he noted.

Mr. Nipah has so far received claims from the Ghana Revenue Authority (GRA)/Social Security and National Insurance Trust (SSNIT) to the tune of GH¢18 million, with claims from employees, including outstanding salaries and compensation due them, amounting to GH¢131 million. He said his office had also received claims from 490,000 depositors, amounting to GH¢8.5 billion. “The government has given us GH¢6 billion, which is made up of GH¢2 billion cash and GH¢4 billion in bonds, so we have been paying depositors through the CBG. “As part of the scheme that was designed, there was a time frame for depositors to submit their claims and so far we have received claims of GH¢8.18 billion from depositors only. Out of this amount, GH¢1.7 billion was submitted after the deadline,” he explained.

He further said the government made provision for GH¢6.44 billion, which was submitted within the deadline, and out of that amount, as part of the validation process, about GH¢390 million was knocked off against people’s loans.

“Some people thought there was free money somewhere so they wanted to take advantage. Some had liquidated their investments but still presented their certificates for claims,” he said. Another reason for rejection, he said, was that as part of the laws that governed the special deposit-taking institutions, they were not supposed to deal in the trading of foreign currencies, but most of them were doing that. “Once it’s against the law, we rejected those claims and referred the matter to EOCO. The claims in this category were around GH¢70 million,” he pointed out.

Those rejections then brought the claims to be dealt with to GH¢5.6 billion, out of which GH¢5.3 billion had been validated, with the rest yet to be done due to the unavailability of records on some of the institutions, he said. “There are 36 institutions on which we do not have records to be able to validate the claims. We cannot rely only on the claims submitted by the depositors and make payment,” he said. He said his outfit had also forwarded that issue to EOCO to investigate. “In the case where EOCO doesn’t get the records, we will request our client, which is the Bank of Ghana, to advise us on the way forward,” he noted.

Mr. Nipah said his office had so far made cash payments of GH¢2.13 billion to depositors, while the rest had been paid with bonds. “As part of the scheme, we grouped depositors into various classifications. We had financial institutions, individual depositors, companies, social organisations such as schools, churches, hospitals and welfare organisations. “With respect to individual depositors, we have paid 330,000 claims, and with those claims, 320,000 have been paid in full in cash and these claims were below the GH¢70,000 threshold,” he added.