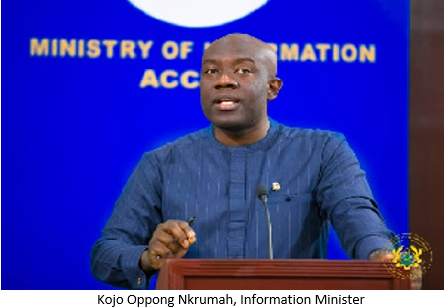 The Receiver of the defunct Microfinance companies and savings and loans firms is set to complete a second level of validation processes to pay all affected customers whose funds were locked up after the licenses of those institutions were revoked by the Central Bank.

The Minister of Information, Hon. Kwadwo Oppong Nkrumah as part of his press briefing today, May 7, 2020 updated on behalf of Mr. Eric Nana Nipah, the Receiver of the defunct 347 Microfinance Companies and 23 Savings & Loans and Finance House Companies that this exercise will finally be completed by May 2020.

Out of the top claim’s worth approximately GHS6.4 billion that was received at the close extended deadline for the submission of claims for these organizations: 347 Microfinance companies, 39 Microcredit companies, 23 Savings and Loans and Finance House Companies, legitimate claims admitted for processing and payment after validation, on the region of GHS5.66 billion. The approximate GHS740 million difference between the total claims received and value of the legitimate claims admitted for processing and payment was due largely two main reasons:

What the Receiver has validated to pay is GHS5.66 billion. Now based on those validations, the Receiver, Special Liquidator has commenced work on some GHS5.32 billion leaving an amount GHS340 million that is going through the very final processes of second level checks.

Payments made to date

Depositor payments are made in forms, that is in cash and by way of zero coupon rated bonds. Approximately GHS2.11 billion has been paid in cash while about GHS2.95 billion has been paid in bond bringing total payment to GHS5.06 billion. Based on total cash payment to be made by the end of depositor exercises, it is expected that the population of individual depositors numbering about 297 thousand whose claims have been validated and accepted in the resolution of the aforementioned groups of companies and not less than 290 thousand which is about 98% of individual claims be fully paid in cash. The remaining 2% individual depositor claims will be paid by combination of cash and bonds.

Next step on payment

The Receiver is first of all concluding the depositor payment process and the key next step to be undertaking are as follows:

The Receiver will conclude the final second level of validation of GHS340 million and make payment accordingly. It is expected that this should be fully completed by the end of May 2020. There are some of the organizations whose book records still have challenges; those institutions are being processed for further investigations. The Receiver will finally submit a report to Bank of Ghana (BoG) on depositor payment scheme.