UT BANK CASE: GIVE AMOABENG ALL DOCUMENTS – COURT TO AG 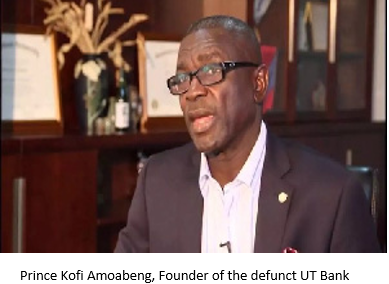 The Attorney General has been asked by the court to give all the evidence it intends to rely on in the case against the founder of the defunct UT Bank, Mr Prince Kofi Amoabeng, who is on trial in connection with the collapse of the bank.

Justice Philip Bright Mensah, a Justice of the Court of Appeal who sat as a High Court judge, ordered the AG on Thursday, 28 May 2020, to serve Mr Amoabeng and four others with all the necessary documents.
The Attorney General has up to June 22 to file the disclosures and serve them on the defense team.

Chief State Attorney Frances Mullen Ansah told the court on Thursday that his side was working to have the trial documents filed and served on the accused persons with the initial June 23 adjournment date in mind prior to the abridgement of time.

In February, Mr Amoabeng and five others were slapped with 42 charges by the state.
The charges came after an Accra Circuit Court on, Wednesday, 5 February 2020 dropped all the earlier charges against him.

The five others include Johnson Pandit Asiama (2nd Deputy Governor of the Bank of Ghana (BOG) between May 2016 and December 2017), Raymond Amanfu (Head of Banking Supervision Department (BSD) at BOG from 2014 to October 2017), UT Holdings Ltd. (company which held shares in UT Bank Ghana Limited (UT).), Catherine Johnson (Head of Treasury who had also acted as the Head of Corporate Banking of UT.) and Robert Kwesi Armah (General Manager of Corporate Banking of UT).

To this end, he said the trial of Mr Amoabeng at the Circuit Court was no longer necessary.
The businessman was arrested together with Mr Michael Nyinaku of the now-defunct Beige Bank and charged for mismanaging their banks which led to their collapse.