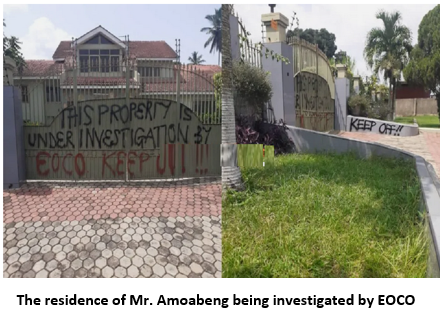 The house according to checks by this portal is located at Kukurantumi in the East Akim District of the Eastern Region. It was built 15 years ago by the businessman and former military officer.

Checks by MyNewsGh.com from EOCO reveal that the latest action was taken last Friday with the explanation it is under investigation, asking the public or assignees to keep off.

A notice at the entrance of the house reads “This property is under investigation by EOCO. Keep off”.

Mr. Prince Kofi Amoabeng or his lawyers have declined comment on the matter but officials of EOCO, when reached by MyNewsGh.com investigations, confirmed taking over the house but declined to give further details.

The Attorney -General (A-G) in February this year filed new charges at the Accra High Court against Prince Kofi Amoabeng, the founder of the defunct UTBank, over the collapse of the bank.

The charge sheet filed at the Accra High Court named as accused persons Dr Johnson Asiama; a former 2nd Deputy Governor of the Bank of Ghana (BoG), Raymond Amanfu; a former Head of the Banking Supervision Division (BSD) of the BoG, Catherine Johnson; Head of